There’s not a lot of storage space in the inner tent in a TT Notch (plenty in the porches) so I used a bit of lateral thinking. I spotted a triangular gear loft from Big Agnes and thought I might be able to adapt it for the Notch ( https://www.ultralightoutdoorgear.c…-tent-accessories-c315/tent-gear-lofts-p13534 )

It fits rather well!

I had to sew a grosgrain loop at the end on the inner tent. I extended two cords to the pole apex glove hooks on the inner. Because the inner ends are secured to the pitchlok apex by elastic you wouldn’t want to put anything too heavy in the gear loft as it would drag the inner down a bit, but it will be handy for lighter items that you don’t want to store on the floor. It doesn’t impede the door either.

Many lightweight tents either lack pockets or have unsuitable ones. There appear to be no easily available after market ones. I was looking for one for my Tramplite and came across the Montbell UL Paper Pouch, At 6g it’s very light. The grosgrain loops at either end of the zip means that it’s easily attached to an inner tent with safety pins. Using safety pins means minimal damage and flexibility in moving it around. Quite a neat solution, although not cheap!

Hoods that flap around in the wind can be annoying. It’s surprising how many hooded jackets don’t have some kind of provision to roll them away securely. My Marmot Ether DriClime Hoodie is a case in point. I got fed up with rolling the hood up and tucking it away so I made a simple “keeper” from a piece of webbing and some kamsnaps.

Genius! One end secures around the hanging loop and the other to a kamsnap I put on the jacket. No more flapping hood! Hopefully the pictures below show how it’s done. It would be easy to do on other jackets, although you do need a kamsnaps tool.

If you use an inner tent in a mid style tent like the Tramplite (or Duomid) , it’s often difficult to get the corner seams tight, especially on uneven ground. You often end up with flappy material which can be irritating in windy weather.

On the latest versions of his tent, the Tramplite, the maker, Colin Ibbottson, has put tensioners on each corner to help prevent this issue. My Tramplite is an early version and doesn’t have them.

As yesterday was a rainy day and I was bored, I thought I’d retrofit some to mine. Although a bit fiddly, then are pretty easy to do. You just hand sew some thin grosgrain loops and connect them with shock cord and use a small cord lock as an adjuster.

I’ve not tested them as it’s so wet in the garden at the moment but they should help. It would be easy to retrofit them to any inner tent for a mid. I’m pleased with the result.

The Lightwave Ultrahike is a pretty robust pack. However, the side pockets are made are made from a stretchy mesh which is vulnerable to snagging. To protect the mesh I asked Craig, who helped mend my Mariposa pack, to make a couple of pocket protectors that I could sew on. Yesterday I plucked up courage to sew them on. They were a little tricky to attach, especially the bottom corners. With a little patience, I think they’ve come out well. It’s a shame that Lightwave don’t use more robust mesh or solid material, but at least my pack should last a good deal longer now.

Great pack though it is, the Lightwave Ultrahike 60 lacks a mesh stash pocket on the front. A while ago I bought an Exped Flash Pack Pocket. I haven’t used it because I wasn’t that happy with the attachment system. Unadjustable elastic with open hooks is a bit Heath Robinson for my liking. Initially I used some glove hooks instead of the open hooks. However, I’ve come up with a better solution using side release linelocs. 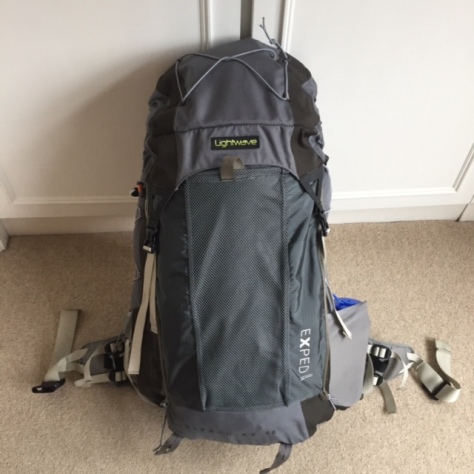 Here’s the pocket in position. As you can see, it fits the Ultrahike nicely.

At the top, in the centre, I’ve used a small carabiner which is hooked on to a grosgrain loop (one that I sewed earlier for a shock cord attachment that goes over the top of the snowlock). This stops the pocket slipping down and makes it easier to put gear into.

At the top, on the sides, I’ve used a combination of a glove hook, which attaches to a loop on the pack, and a side release lineloc for quick release and adjustment.

At the base there’s no convenient loop, so I sewed a grosgrain loop on the hip belt stabiliser with a side release lineloc. This system has two advantages over the original elastic and hook system.

Firstly, the linelocs are adjustable, so the pocket is more secure and can be fine tuned for different loads. Secondly the side release linelocs can also be more quickly and easily released and re-engaged.

One of the nice things about the Flash Pack Pocket is that it can be reversed. On one side it is mesh, better for drying. On the other side, it is solid, better for rainy weather. With this system it is very quick to flip around much easier to re-engage securely.

I’m very happy with the way this has worked out. Anyone with a modicum of sewing skill could copy this if they wanted to.

My Gossamer Gear Mariposa rucksack is starting to get a bit battered. On the Challenge I ripped the rear mesh pocket on the first day, ducking under some fallen trees. I effected a temporary repair with some Tenacious Tape. However, I wanted something more permanent.

I asked Paul of Tread Lite Gear to make me a patch from an offcut of dyneema grid stop fabric to sew over the top of the tear.

The first thing to do was to sew up the tear. Not the neatest of jobs, but it should hold. 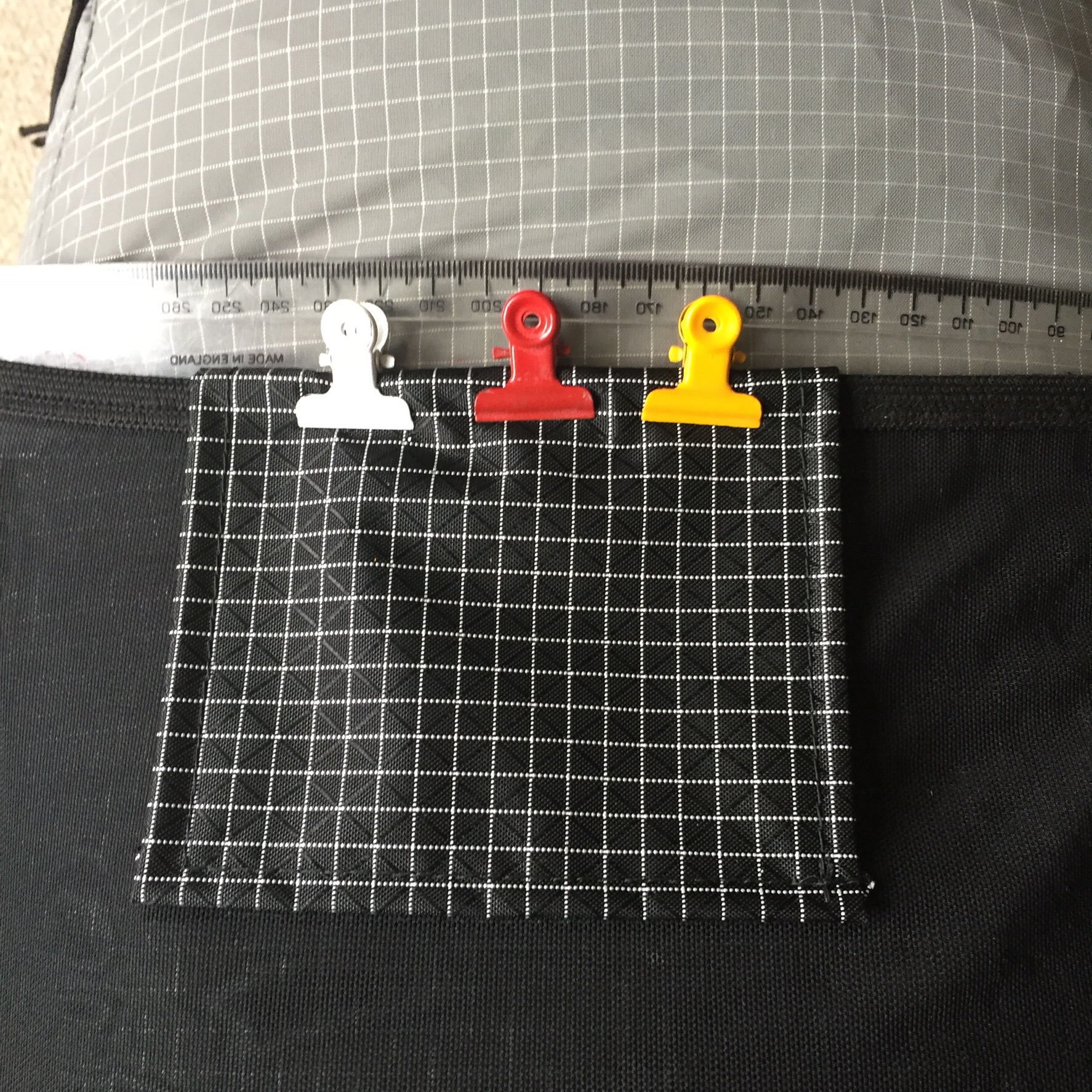 Next I folded the patch over both sides of the tear and secured temporarily with some small clips. I stretched the top of the pocket with a ruler. Then I tacked the four corners with a few stitches. Lastly, I sewed the four sides. This was a pretty fiddly job. Stretch mesh is not the easiest base to sew on. With a bit of patience, I did a reasonable job. 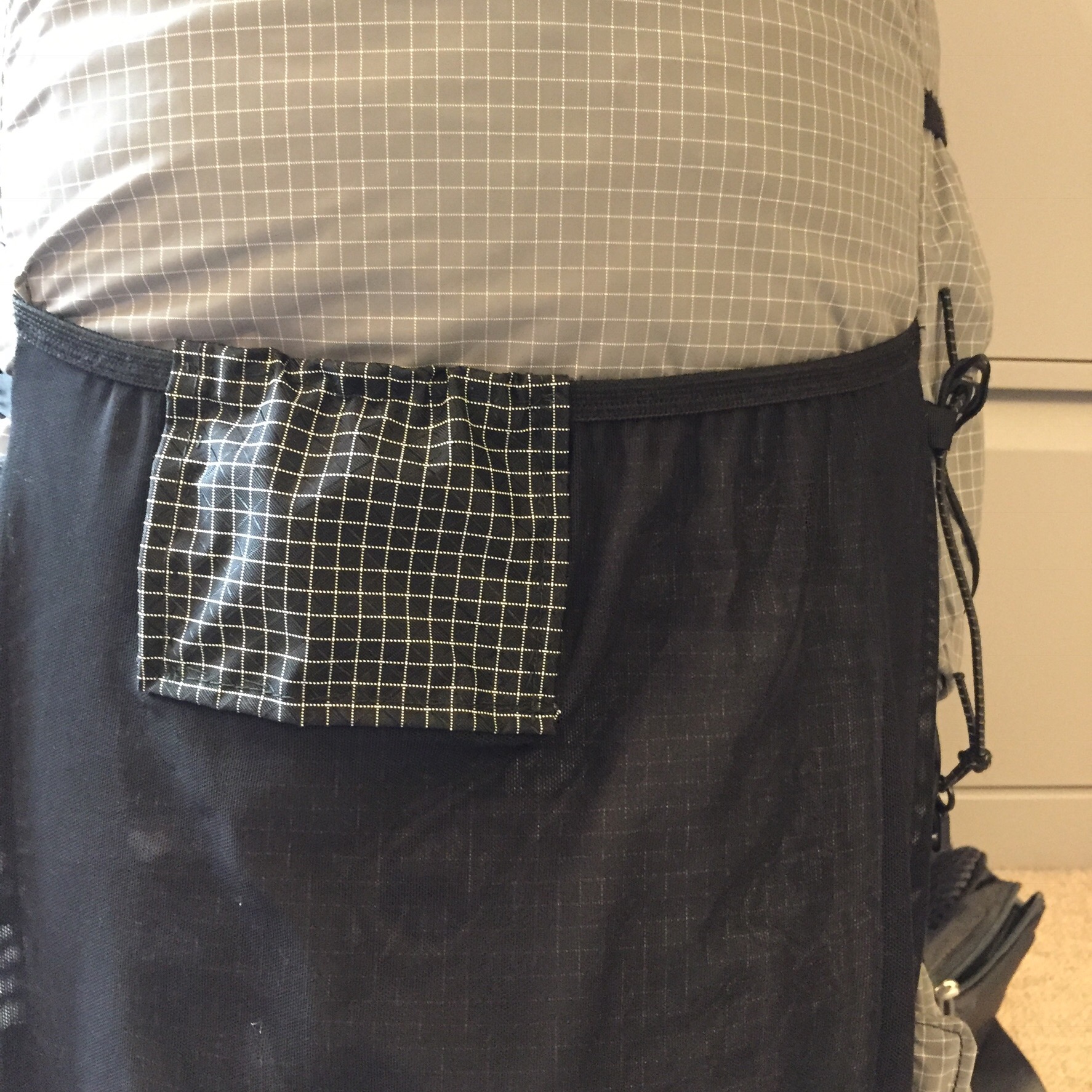 I think the result is pretty good and has rescued my favourite pack. While I like mesh pockets, they are definitely a weak spot on many packs and not easy to repair. I think pack manufacturers should give a bit more thought to having more robust mesh.

Fed up with straps dangling all over the place? Here’s a simple solution copied from my Exped Thunder pack. Most of the straps on the Thunder have Velcro keepers.

Any excess strap is rolled up and secured by a Velcro keeper sewn on the end of each strap.

The sleeping pad straps on the base of my Osprey Talon 44 are particularly annoying and dangle down. The solution was to mimic the Exped Thunder keepers. 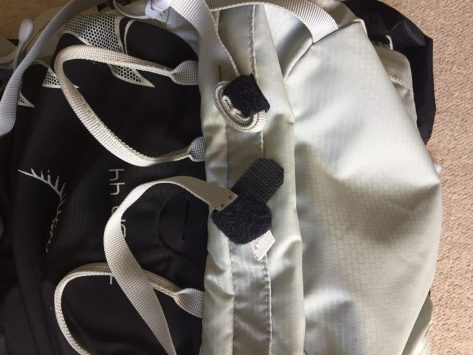 It’s really simple to do. I hand sewed them. It’s worth using a thimble as it’s tough to push the needle through the Velcro. It only needs a few stitches to keep in place as there’s no strain on it. Simple, but effective. 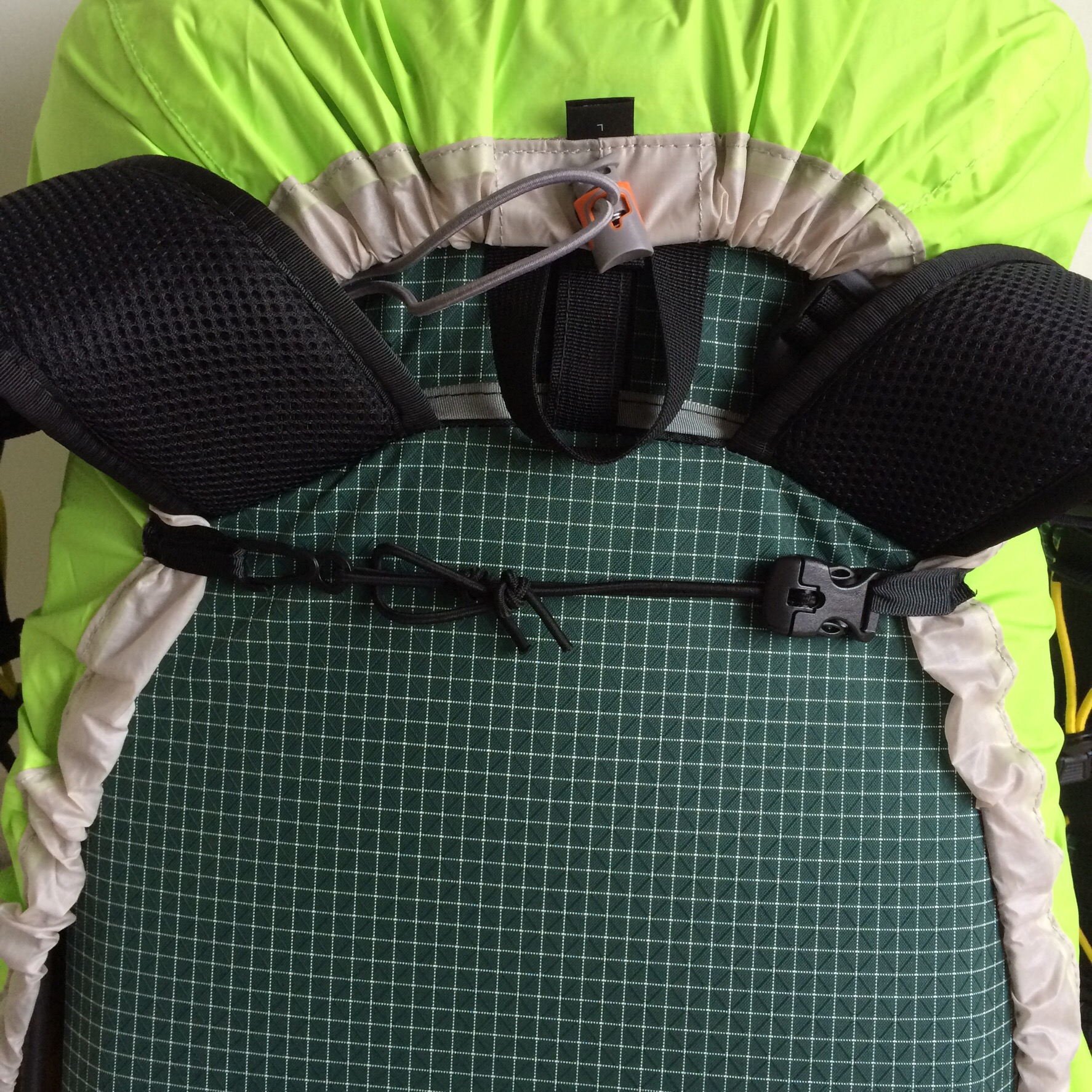 I copied this idea from my Osprey rucksack raincover for my smaller Exped raincover. It only took a few minutes to do with some grosgrain, a glove hook, a side release line lok and some shock cord. It works really well to make the raincover fit better and makes it secure against flying off in a strong wind. Simples.

Yet another tweak on the ULA Ohm. Two removable shock cord top straps. Very easy to do, I used two side release cord locks and two glove hooks with some shock cord. The trouble with a single webbing strap is that anything attached is a bit unstable. The shock cord stabilises a tent or stuff sack. They are removable if they are not needed. I’m looking forward to using my modified Ohm. Unfortunately, there won’t be an opportunity until the end of June. 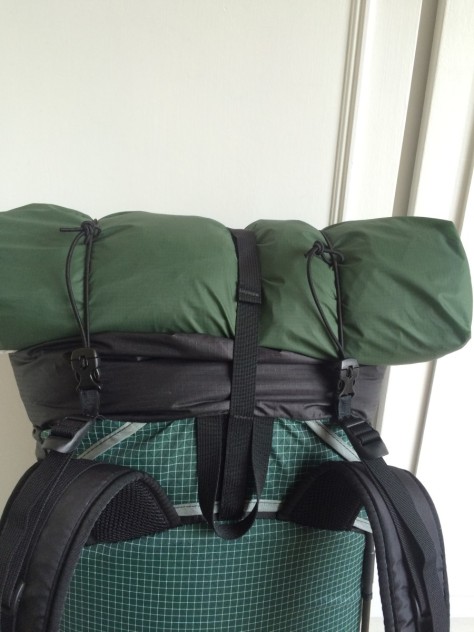