By now, I was fully into the rhythm of backpacking. Generally I woke at first light, around 4am and usually got up between 6am and 7am, depending on the day ahead. Today I was up reasonably early as I knew we had a longer day. However, as I went to the shower block it was clear that Shap had risen even earlier. 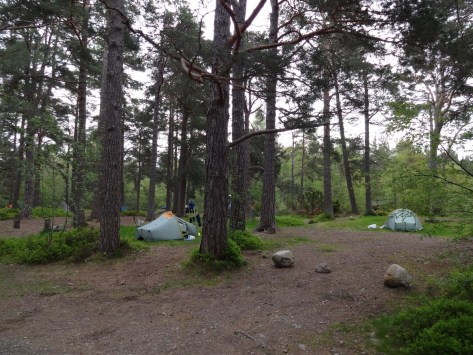 The forecast was for a windy day but reasonably clear, so he was determined to make the best of the weather and take a route over the tops. The sunshine and wind persuaded me to wash some socks and a base layer. Hopefully these would dry off on my rucksack during the day.

After breakfast, I checked with Dave that he was happy to walk with me, as I felt I might have railroaded him. Dave was packed before me and waited patiently as I packed and took down my tent. We dropped off our shower key cards into the metal letter box and then we were off down the cycle track to Glenmore. 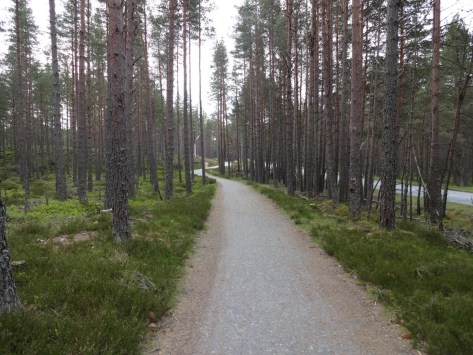 While the cycle path is not very exciting, it’s certainly a lot better than walking on the road. Having Dave to chat to made the one and a half hours to Glenmore much more pleasant. We did have one slightly bizarre incident as we were walking down the track. At one point, I had the feeling that we were being followed. I looked round to find we were being stalked by a coach. Not what you would expect on a cycle track!

On the way to Glenmore

We made good time to Glenmore. Instead of the camp site cafe we went to the cafe at the information centre. There we had second breakfast. I had a bacon roll and raspberry cake, while Dave had a full cooked breakfast. This set us up for the day. Suitably nourished we set off for Bynack stables.

After a pleasant stroll through the woods, we reached Lochan Uaine where we met fellow Challenger Sandy Millar. We didn’t tarry long as we had some miles to cover. Turning from the track that goes to Ryvoan Bothy, we soon reached the bridge at Strath Nethy.

We refilled our water bottles and sat down for a quick breather. Almost immediately, Jonathan Smith joined us and then Sandy Millar. It was tempting to stay a bit longer in the sun, but we had to push on. This time we were with Jonathan as well. Different climbing speeds meant we spread out as we ascended the shoulder of Bynack More.

The wind was very strong by now and occasionally I was knocked sideways. Jonathan wanted to go up Bynack More. I had already been up it a few years ago, so Dave and I opted to bypass it and go round the eastern side.

The track was generally good and the two stream crossings were relatively easy. The only difficulty was the wind, which made the going tough at times. It strengthened further as we descended to the Fords of Avon. 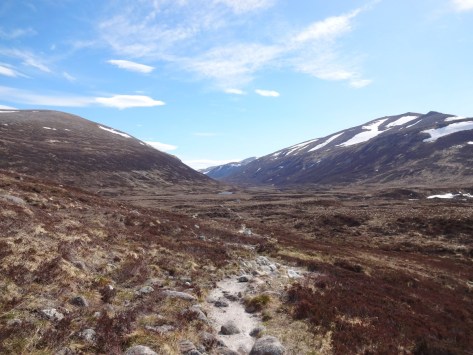 Descending to the Fords of Avon

At the Refuge we stopped for a drink and a bite to eat in the sunshine, with some shelter from the wind. Not long after, Sandy arrived. He was going to camp here and started putting up his tent. We left for the last leg of the day.

We could have taken a much shorter route to Faindouran Lodge north of Dagrum, but we would have missed out on the delightful path that follows the River Avon, east of the Fords of Avon. It was every bit as lovely as I remembered it.

Initially it follows a lovely ravine. Although wet in places, the path was good. After about two kilometres, the river valley widens out and the path crosses more boggy ground. It was still a pleasant walk but the path became somewhat intermittent. I spotted some fresh footprints. We speculated whether we would find anyone at Faindouran.

Although it is an enjoyable walk, at the end of a day, it does seem to go on for a long time. Eventually we arrived at Faindouran. To our surprise, there was no-one else there. The bothy is closed because the chimney has collapsed. However, there is a sizeable area of comparatively flat ground by the river suitable for camping. 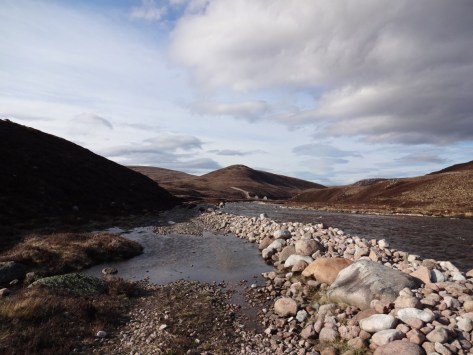 Even here, the wind was still strong. Just as we finished pitching, Jonathan Smith arrived and decided he would stay for the night. The cold wind prevented any socialising, although in the late evening it died down, giving us one of the coldest nights of the Challenge.

Despite the wind, it had been another really good day. I had enjoyed Dave’s company. I was in two minds as to whether I had made the right decision to change my route. However, I was really focussed on making sure I would complete my walk. Also, Dave’s feet were a bit sore, so the revised route had probably been a better option, with paths rather than bog hopping.