It was good to meet Sean, the man behind OookWorks in the Carneddau. He came bearing a very special package, my new Duomid hybrid inner. We’ve been plotting this little baby since November. The original brief was to make an inner for the Duomid that would weigh less than 300g. The first plan was to have walls which were half cuben, half mesh. However, on reflection and the experiences of Blogger Zed and his cuben walled Trailstar shelter, I decided that the end walls should be ripstop to allow some transpiration of water vapour but the long walls should remain cuben. The walls are 50cm high; enough to keep out breezes. I also wanted two pockets. The floor is a rather lovely grey Chikara. The end result weighs 315g, slightly above the anticipated weight, but small change in the overall scheme of things. 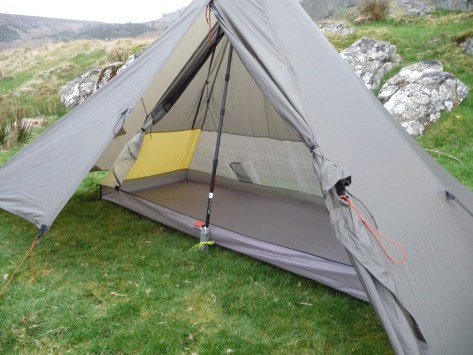 Now I think you will agree, when you see the pictures, Sean has done an absolutely outstanding job. I feel like I have the Rolls Royce of inners. I was stunned by its beauty when I first pitched it. The old nest is very good, but this one is jaw droppingly good. Normally, it takes a few tries to get the pitch right, but this ones pitched perfectly virtually from the word go. 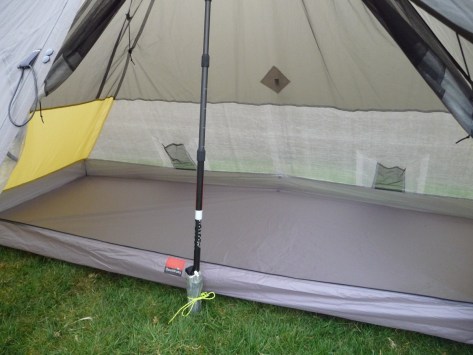 The new bathtub groundsheet with corner struts has made a huge difference to the pitch. Although it is slightly shorter than the old inner, the upright walls of the bathtub make it feel bigger. Using Chikara was a bit of a punt when we originally talked about it, but I think its going to be good. It feels reassuringly robust, unlike a cuben groundsheet. It is slightly slippery, but less so than silnylon. It does rustle slightly but not that you’d notice. It also shrugs off moisture well. So much so, that it was hardly wet when I packed next morning. 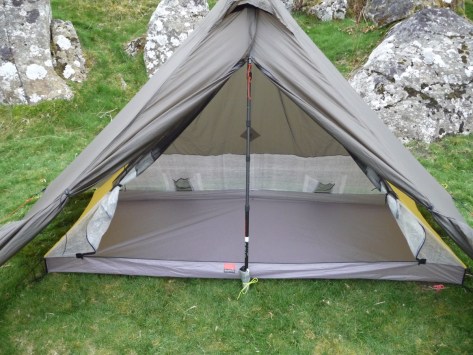 The combination of ripstop and cuben is pleasing both aesthetically and functionally. OK it was only one night, but there was no condensation at either end, nor on the cuben walls. I can imagine there may be times where I might get some dampness on the cuben, but I won’t get a damp sleeping bag foot. The mesh above the solid walls, makes for a pleasantly airy feel. In the old inner, it could feel a little claustrophobic at times, but the mesh changes that completely. 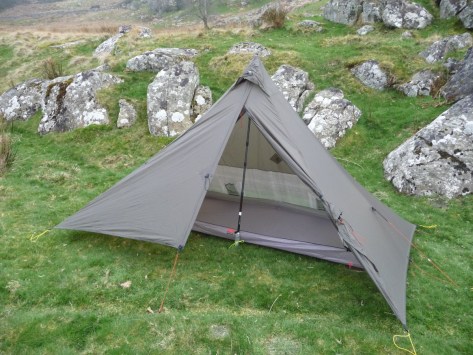 The new linelok tensioning system at the apex is much better than the previous shock cord system. It makes for a perfect “drape”. Another innovation is that the mid-level shock cord tensioners can be adjusted from inside the tent. Not surprisingly, the whole thing packs down very small. The cost was £180, which I consider extremely reasonable for a high quality piece of work. If you want one, it may cost you a bit more, as I know that materials costs have risen since I paid for mine last year. However, when you consider the work and care that goes into these and that many people don’t think twice about blowing £250 on a waterproof jacket, I think it’s a bit of a bargain.

You can stop blushing now, Sean. More pictures from Sean’s blog can be seen here.

This piece of gear was bought with my own money and I have no interest, financial or otherwise, in OookWorks, in case you are wondering. I do think that Sean is a jolly nice chap, though. 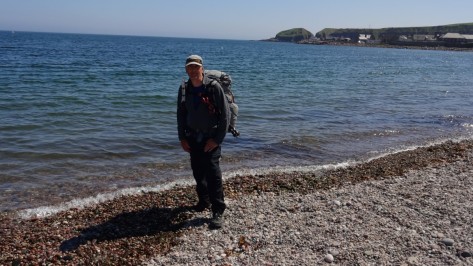