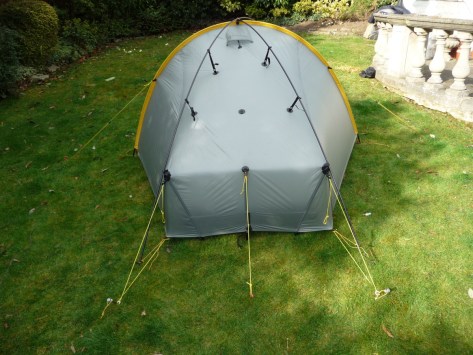 You only find out the weaknesses of gear when the conditions get extreme. Last year, camping below Scafell, I encountered strong gusty winds overnight. The Scarp relies on the four corners being securely pegged to retain its shape and puts a lot of strain on these points. One of the guys slipped through the linelok, which lead to one corner of the tent coming half collapsing. It wasn’t a disaster and was soon rectified. However, it alerted me to the possibility that the combination of 2mm deyneema cord and lineloks was not always totally secure.

You can see the results in the pictures above and below. I decided to revert to the normal Scarp guy configuration, partly because it saves a bit of cord and partly because I think the modified system is overcomplicated, even though it does save two pegs. 2.5mm cord is awkward to thread through the lineloks, so a bit of patience is required. It also requires larger size lineloks for the side guys. Fortunately I had a couple spare from another tent.

It is impossible to thread 2.5mm cord through the retaining eyelets for the crossing poles, so these need to have their own cord. I retained the original 2mm cord for these as they don’t take much strain. It also means that the 2.5mm guys need to be tied off at ground level, to leave the linelok free for the crossing pole retainer. The fact that the guy can only be adjusted through the top linelok is not an issue. 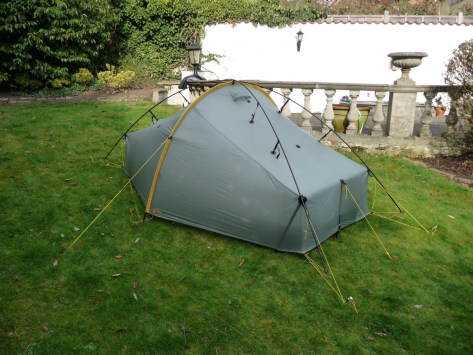 4 thoughts on “Re-guying the Scarp”