I’ve started modifying my Scarp 1. Today I put zip pullers on the door zips, modified the inner door tie back with a cord grip and loop, made a hook and loop arrangement for the end vents, improved the raising and securing of  the porch flysheet and rigged an internal clothes line.

1) Zip pullers. This is a very easy mod. The pullers are very small on the zips, so attaching longer pullers makes opening and closing the zips much easier. For the flysheet doors, I used some Alpkit pullers that I’ve had lying around for a while. For the inner doors, I used some loops of guyline that I had bought at the same time as the tent. If I was being a total gram nutter, I would have used the guy loops on the fly doors as well, but the grey Alpkit ones look rather good.

2) Inner door tie backs. I wanted a more secure method of tieing back the inner doors. On my Marmot tent they use a loop and a cord grip. This is a really easy but secure method of tieing back the doors. On the Scarp, instead of string, there is a thin piece of ribbon for tieing. I used a round cord grip (from Pennine Outdoors) on one ribbon, tieing a knot at the end so the cord grip wouldn’t slip off. For the other ribbon, I doubled it back into a loop and secured it by sewing. Initially I used polyester thread but it wasn’t strong enough. Fortunately I had some nylon thread, which was much more robust. To tie back the door, you pass the cord grip through the loop and push the cord grip up the ribbon. Simple but effective. Here’s a picture, although black on black doesn’t work very well! 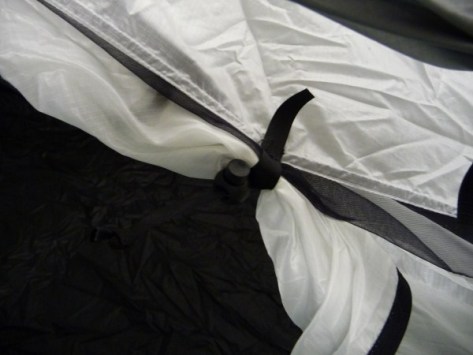 3) Hook for end vent. The end vents have a vertical zip and a piece of elastic, which is secured over the centre guy line. However, this means unpegging the guy. My idea was to have a hook. In order to make this work, you need to make a small loop threaded through the ribbon that secures the line lok to the flysheet. I used some hooks that I pirated from an old Vango tent. They work perfectly. Now I have an improved and more elegant system.

4) Improved means of securing the raised flysheet. The idea of being able to raise the bottom of the flysheet to aid venting is ingenious. However, the method for securing it is a bit difficult and seems to strain the material. The answer was to use an Alpkit clipper to attach the bottom of the flysheet to the clip provided. It works well and it’s no longer a strain to attach. (Addendum: I’ve now replaced the clipper with a small loop of cord) 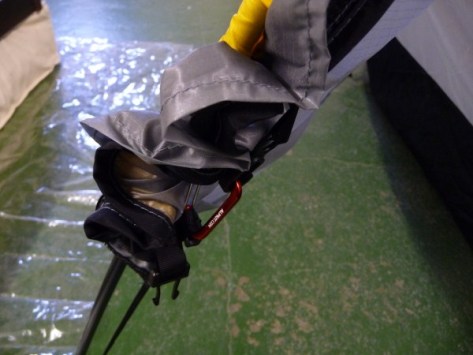 5) Internal clothes line. At the apex of the doors there are two rings and there is a clip in the centre of the roof panel. I used a couple of Vango hooks at either end of a piece of shock cord to rig up a flexible clothes line for drying clothes, hanging a light or storage. Very useful. Sorry, no picture.

I also had a little play around with the guys at the end of the tent. I’m reasonably sure that the modification that I’m thinking about will work, but I need some more guy line and to pitch it outside. I’ll keep it under wraps for the moment, but I think it will be better than the current arrangement. I also smoothed off the ends of the Easton pegs as the sharp ends had small burrs. I also had a look at whether the Comp footprint works as a porch groundsheet. Although not perfect, it’s a reasonably good fit.

So that’s it for the moment. The next things to do are: a better pocket arrangement and the end guys.